How Prosperity Through Connectivity Battles Russia in the Borderlands

Rising Russian military threats to Ukraine naturally attract major international attention, and yet the independence and sovereignty of the dozens of countries stretching from the Baltic Sea to the Black Sea and to the Caspian require not only the security of those nations, but also the strengthening of their economic sovereignty.

In turn, this necessitates close partnership and collaboration among these nations. Economic, energy, digital, and broader infrastructure connectivity is needed to facilitate the trade and transit of goods, services, and data. There is still mostly untapped economic potential in linking resource-rich, but landlocked, Central Asia and the resource-thirsty countries of Central and Eastern Europe, which can bring together economic interests of pivotal states like Poland, Turkey, Ukraine, Romania, Georgia, Azerbaijan, and Uzbekistan.  Trusted Connectivity, or physical and digital infrastructure connectivity between like-minded countries based on trust in a technological and legal framework, should be the future framework for regional economic integration.

The initiative to synchronize Ukraine’s power system with the EU’s electricity grid is a telling example: this would allow for the flow of electricity in both directions and allow Ukraine to decouple from the Russian electricity grid by 2023. If completed successfully, this project will drastically reduce dependence on Russian energy and strengthen energy and economic sovereignty on the part of Ukraine. It will also mark a step toward greater European integration of a country with rich human and natural resources and significant market size, bringing positive new energy to the European economy.

The Black Sea has a special role to play in the wider project for Central and East European countries. If the hard and soft infrastructure elements can support increased transit volumes to lower the costs of transportation, the Black Sea will play a larger role in Asia-Europe trade. Asia’s trade with Europe via land is growing, but a great majority of the cargo from China, South-East Asia, and the Indian subcontinent still travels via maritime routes, with average delivery terms exceeding 40 days. The need for relatively faster delivery options for goods with a shorter shelf life is growing, and multimodal transportation via the Central Asia-Caspian-Black Sea-Europe corridor can provide that.

Interestingly, the Black Sea is an important trade outlet for the Russian Federation as well. A quarter of natural gas exports and a significant part of oil and oil products, grains, metals, coal, and other items, essential for the viability of the Russian economy, are traded via the Black Sea. This means that stability in this area is essential to Russia’s economic interests. But the annexation of Crimea, the fueling of conflict in Eastern Ukraine, and the occupation of two regions inside Georgia, amplified by constant threats toward these countries, has escalated tensions and created the very instability that damages Russia’s economic wellbeing.

Black Sea trade has received an additional boost with the Three Seas Initiative (3SI), seeking to fill the $1.35 trillion infrastructure development gap in the region and to link the Adriatic, Baltic, and Black Sea areas. The 3SI aims to promote cooperation for the development of infrastructure in the energy, transport, and digital sectors for 12 EU member states — Austria, Bulgaria, Croatia, the Czech Republic, Estonia, Hungary, Latvia, Lithuania, Poland, Romania, Slovakia, and Slovenia — around and between the three seas. While Ukraine, Moldova, Turkey, Azerbaijan, and Georgia are not included in the 3SI, they will be beneficiaries of greater connectivity in the area, and can at the same time contribute to the 3SI’s success — the program will benefit significantly from the greater linkages to Caspian resources and transit potential of the South Caucasus and Central Asia.

There is a political will to develop these links between Central Asia and Europe in all regional countries from the Baltics to Central Asia. There is a chain of infrastructure projects connecting Baltic and Black Sea ports, and the development of railway, highway, and port infrastructure in Georgia, Azerbaijan, Turkmenistan, Uzbekistan, and Kazakhstan, which can enable greater connectivity between Central Asia, including Western China and Afghanistan, and Europe. Ferry and maritime connection between Bulgarian, Romanian, and Ukrainian ports with Georgian ports, as well as undersea power lines and digital cables under consideration, will provide the direct links between 3SI countries and the South Caucasus. Already existing infrastructure allows significant trade between Central Asia and the South Caucasus with Turkey, Ukraine, Romania, and the Balkan states, but much greater opportunities are still underutilized.

Amid rising geopolitical tensions with Russia and China and the resulting realignment of the global supply chain, a strategic vision of integration of trade and transit between Central Asia and Eastern Europe should be a priority for both the US and EU. Diplomatic efforts with like-minded countries combined with the investments from the development finance institutions (DFIs) like the World Bank, the European Bank for Reconstruction and Development (EBRD), the US International Development Finance Corporation (DFC), and others, will ensure the conditions for commercially viable private investment as well. Ultimately, however, it will be the private sector that drives trade and connectivity between regional countries. As an example, a private New Port-Pace Terminal in Poti, Georgia, leveraged with funding from the US DFC and allowing larger ships to dock to terminals, will start  operations by the end of this month (January 2022.) This allows more efficient connectivity inside of the Black Sea basin, as well as to the Mediterranean and beyond.

Coordination between international diplomatic efforts, DFIs, and assorted private sector interests can create a network of sovereign countries connected through trust and varied forms of infrastructure. While this process will not solve the region’s tough security challenges, it will help to improve the areas’ strategic position, reduce sources of internal instability and bolster their resilience in the face of external manipulation.

Dr. Mamuka Tsereteli is a senior fellow of the Central Asia-Caucasus Institute at the American Foreign Policy Council, and an Adjunct Professor at American University’s School of International Service. 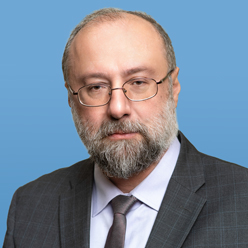