The Next Challenge To U.S.-Israeli Ties: China

Earlier this month, Secretary of State Mike Pompeo traveled to Israel on his first foreign visit since the outbreak of the global coronavirus pandemic. The whirlwind one-day trip served as an opportunity for America’s chief diplomat to interface with Israel’s incoming “national unity” government, discuss Israeli Prime Minister Benjamin Netanyahu’s controversial plans to annex parts of the West Bank and Jordan River Valley, and press for progress on President Trump’s “deal of the century” on Israeli-Palestinian peace. But the Secretary’s visit was intended for another purpose as well: to put Israel’s government on notice that it needed to rethink its growing political, economic and strategic ties to the People’s Republic of China (PRC).

Explaining the rationale for the Secretary’s visit, David Schenker, the State Department’s Assistant Secretary for Near East Affairs, noted: “We don't want them to get into a problematic relationship with China. There have been times in the past where China has been an irritant to the bilateral relationship and we don't want to see that happen again.”[1]

In truth, however, it already is. Over the past three years, the Trump administration has been a stalwart defender of the longstanding “special relationship” between Washington and Jerusalem. Yet during that time, Israel’s extensive – and growing – contacts with China have emerged as a source of growing concern for policymakers in Washington. It is an issue that, against the backdrop of the current international health crisis, has grown considerably more acute.

WHY WASHINGTON IS WORRIED

Over the past dozen years, in line with its popular image as a “start-up nation,”[2] Israel has worked diligently to promote itself as a world-class high-tech hub and global innovation incubator. This effort has met with considerable success; the country has experienced a surge in investment in recent years from foreign nations and businesses eager to capitalize on this dynamism.[3]

China has been prominent among them. The PRC has steadily become a major patron of Israeli innovation over the past decade, investing billions of dollars across the length and breadth of the Israeli economy, in everything from agriculture to software to infrastructure. Notably, much of China’s attention has focused on Israeli companies in Israel’s high-tech industry, which represents the fastest growing and most dynamic sector of the country’s economy.[4] So significant are China’s overall investments that estimates now predict the PRC could eclipse the U.S. as the single largest investor in Israel in coming years.[5]

As it has grown, however, China’s presence has steadily rubbed up against the longstanding strategic relationship between Jerusalem and Washington. Those ties have grown exponentially since their formal codification by the Reagan administration in the early 1980s, and now encompass extensive collaboration on a broad range of defense and security matters, with undeniable benefits to both countries.[6] Yet today, this dynamism is beginning to be adversely impacted by Israel’s burgeoning ties to China.

Perhaps the most visible problem has been China’s involvement in Israel’s northern port of Haifa. Back in 2015, Israel's Transportation Ministry inked a multi-billion-dollar deal with China's Shanghai International Port Group to modernize and subsequently run day-to-day operations at the port facility.[7] The arrangement has raised serious national security-related concerns in the United States, given Haifa’s role in hosting naval visits from the U.S. Sixth Fleet and joint drills between the U.S. and Israeli navies. This function has made the question of who, exactly, operates the port a key concern for the U.S., with military officials becoming more and more vocal about the possibility that port visits could end, or at least be reduced, once China assumes control of the facility in 2021 on the basis of intelligence and surveillance concerns.[8]

But worrisome to Washington as well is China’s growing penetration of the Israeli high-tech sector. U.S. officials have estimated that the PRC now directly controls, or has influence over, as much as one-quarter of Israel’s multi-billion-dollar tech industry, including defense contractors working on sensitive projects jointly being developed with the United States.[9] They have also intimated that, unless Israel takes steps to better regulate China’s growing economic stake in the country, it could end up adversely affecting joint projects between the two countries.

For its part, Israel’s government has taken at least some steps to ameliorate these concerns. For instance, in October 2019, the country’s security cabinet formally established a new oversight mechanism to monitor foreign investments modeled after the U.S. Committee on Foreign Investment in the United States (CFIUS).[10] (Notably, however, the new Israeli body, as currently constituted, lacks oversight over the country’s thriving tech sector – the very segment of the Israeli economy that has garnered the most significant Chinese attention). Israeli officials have likewise worked with their U.S. counterparts to provide the ability to inspect sensitive facilities thought to have been compromised by the Chinese.[11]

In the main, however, Israel’s response has failed to match American concerns in scope and gravity. The current coronavirus crisis, meanwhile, has focused growing U.S. attention on this long-running problem.

For much of the past two decades, it has been a bipartisan canon of American foreign policy that – through greater political outreach and economic engagement – it would be possible to transform the PRC into a “responsible stakeholder” on the world stage.[12] The Trump administration’s approach to the PRC, by contrast, has been a good deal more skeptical. Virtually every strategic document released to date by the current Administration revolves around the reality of “great power competition” with China (as well as Russia). This sentiment, in turn, has been given new impetus by the outbreak of the coronavirus, which has provided proof positive of China’s political machinations surrounding the pandemic [13] and helped to sour the American public’s views of the Chinese government.[14]

This, in turn, has altered the way in which the United States approaches its international allies – many of whom have historically sought to balance their relations with Washington with their ties to Beijing. Whereas previously the U.S. generally accommodated this arrangement, there are now signs that the Administration plans to use the current opportunity to press many to

distance themselves from the PRC. Israel is no exception in this regard; Secretary Pompeo’s May visit reportedly included a warning to Israeli officials that they “must stop any action that strengthens the Chinese Communist Party, even if that means canceling projects already planned.”[15]

Such a stance has the potential to represent a real challenge to the strategic relationship between Washington and Jerusalem. U.S.-Israeli disputes over China have occurred in the past (most famously in the 1990s, when Washington objected to Israel’s planned sale of the Phalcon early warning radar system to Beijing). But such disagreements have tended to be transient in nature, and stopped short of derailing the broader partnership between the two countries. Today, however, such compartmentalization is likely to prove considerably more difficult. The current, expanding competition between the United States and China reflects a significant change in global strategic context – one that is likely to extend far beyond the November U.S. elections. As such, it is no longer possible for policymakers in Jerusalem to simply remain on the sidelines.

For Israel, adapting to this new strategic reality means taking U.S. concerns about China much more seriously. Although the Israeli government has indeed taken some remedial steps in the recent past, the country’s policymaking elite on the whole does not yet generally appear to be attuned to the gravity of the problem – or to the potential political ramifications that may result.[16] Israel’s government needs a paradigm shift in its thinking about the PRC, one that begins to view Chinese investments as a whole as a national security problem.[17] Once that happens, the country will need to take additional steps to protect the integrity of sensitive projects against potential compromise as a result of Chinese involvement. In this regard, particular attention needs to be paid to safeguarding the joint development of innovative missile defense capabilities – which has emerged as one of the most vibrant and fruitful areas of collaboration between the two countries. 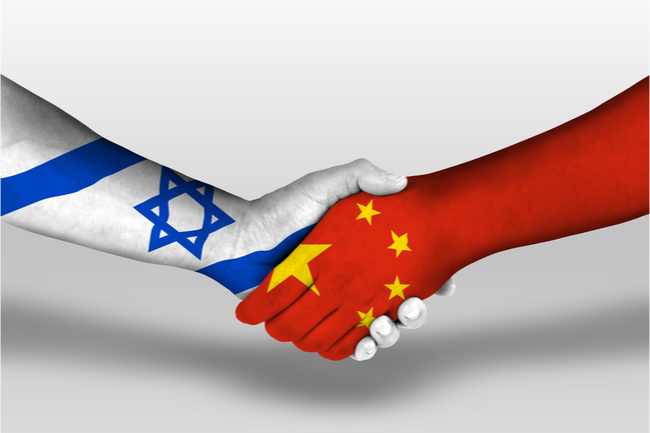 The United States, meanwhile, requires a more nuanced policy that differentiates between the types of Chinese investments in Israel. In truth, many of these – such as China’s acquisition of Israeli dairy manufacturer Tnuva and its involvement in the construction of a light rail line in Tel Aviv  – implicate few, if any, legitimate national security concerns. By contrast, Chinese investments in Israeli work on artificial intelligence, surveillance and cybersecurity are substantially more concerning, and have the potential to adversely impact Israel’s collaboration with the United States. Focusing on the latter, while maintaining a permissive attitude toward the former, would help build trust with officials in Jerusalem. And if the Trump administration insists that Israel renege on existing projects involving China (such as the Haifa port), it will need to come up with a serious plan to compensate Jerusalem for the economic penalties and hardships it may incur as a result.

Through such steps, the two countries can help safeguard their partnership in the face of what is fast becoming a serious strategic challenge. The historic and strategic nature of U.S.-Israel ties should give both nations every reason to do so.

6. See, for instance, Michael Eisenstadt and David Pollock, “Friends with Benefits: Why the U.S.-Israel Alliance is Good for America,” Foreign Affairs, November 7, 2012, available at https://www.washingtoninstitute.org/policy-analysis/view/friends-with-benefits-why-the-u.s.-israeli-alliance-is-good-for-america.