The Logic of Irregular War: Asymmetry and America’s Adversaries

For the United States, asymmetric warfare has emerged as the “new normal.” The large-scale conventional campaigns that typified U.S. military engagements for much of the 20th Century are increasingly things of the past. Instead, the quarter-century since the end of the Cold War and the collapse of the U.S.-Soviet balance of power has seen irregular war truly come of age, with more and more hostile nations pursuing asymmetric means in order to secure the strategic advantage vis-à-vis the United States. In this volume, a group of leading national security practitioners and subject matter experts comes together to analyze the asymmetric strategies being pursued today by America’s main state-based adversaries—Russia, China, Iran and North Korea—and to explore how U.S. policymakers can respond more effectively to them. 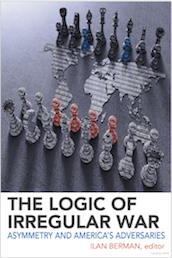