AFPC Capitol Hill Briefing: “What can the Space Force do for America?”

On April 12th, the American Foreign Policy Council (AFPC) sponsored a virtual Capitol Hill briefing on What can the Space Force do for America: Understanding USSF mission, role, technological capability, and optimal utilization. The briefing examined the current role and mission sets of the Space Force, its capabilities, and how it can best be utilized to protect and advance U.S. national security and economic interests in the new space age. AFPC Vice President of Operations and Director of Defense Technology Programs Richard Harrison moderated the briefing, whose panelists included Assistant Vice President for National Security Space at the Aerospace Industries Association John Galer; AFPC Senior Fellow in Defense Studies Peter Garretson; Editor in Chief of the Space Force Journal and Former NSC Defense and Space Policy Director Dr. Mir Sadat; and President and Founder of the Space Force Association William A. Woolf. The following is a summary of their respective remarks.

China’s space roadmap entails asteroid mining, nuclear-powered shuttles for space exploration, and industrialization of the Moon to fabricate satellites that can harness energy in space—thus exploiting a global space market poised to rise from $350 billion annually today to trillions over the next three decades. America requires a “North Star” vision for space—a whole of government response in coordination with allied nations and private sector partnerships to counter the Chinese strategic space threat and to realize the great benefits space has to offer by empowering the U.S. space industrial base. The U.S. increasingly requires a military service focused specifically on protecting American national security and economic interests in space. This realization led Congress to establish the Space Force. Yet, the establishment of the Space Force was initially met with significant opposition, and the proper role, mission sets, and potential effectiveness of the new service remain poorly understood in the defense community. The formation of the Space Force will ensure that the U.S. prioritizes this increasingly crucial domain. Investments in the Space Force will also allow the commercial space sector to flourish, and will provide private companies with the security assurances they need to have confidence in the emerging space economy.

Prior to the establishment of the Space Force and U.S. Space Command (USSPACECOM) in 2019, the Air Force through Air Force Space Command, Space Force’s precursor, was the primary military space service, and U.S. Strategic Command (USSTRATCOM) was responsible for Joint Force space operations. In response to rising threats in the space domain, Congress established the Space Force and USSPACECOM through the 2020 National Defense Authorization Act (NDAA) to safeguard U.S. national security interests in space. The Space Force is commanded by General Jay Raymond, the Chief of Space Operations, who is also a member of the Joint Chiefs of Staff. USSF is composed of around 16,000 military and civilian personnel and three commands responsible for operations (Space Operations Command), acquisition (Space Systems Command), and training (Space Training and Readiness Command). Like the other military services, the Space Force’s primary duty is to organize, train, and equip. The Space Force’s mission sets include space domain awareness, providing positioning, navigation and timing (PNT) coverage, satellite communications, command and control of DOD satellites, enabling space launches, monitoring missile launches, and preparing for and deterring orbital and space electronic warfare. USSPACECOM is one of the 11 combatant commands and is led by Army General James H. Dickinson. USSPACECOM is primarily responsible for defending U.S. space assets and providing support to the terrestrial combatant commands.

Two foundational documents laid out the justification and role for the US Space Force (the President’s Space Policy Directive-4) and formally established the Space Force and its enumerated missions (2020 NDAA). In August, the Space Force unveiled “Spacepower: Doctrine for Space Forces” which articulated the Space Force’s vision, guiding principles for military spacepower, and the importance of spacepower in safeguarding America’s national security interests.  But do these documents provide sufficient guidance to guide development of personnel, culture, and systems?  There are currently two schools of thought when it comes to spacepower. The first views spacepower as more of a support function for terrestrial forces. The second school of thought views spacepower more strategically, and envisions the Space Force securing and advancing America’s economic interests in space, providing security services in cislunar space (including space resource extraction), and acting in a manner similar to the Coast Guard or a blue water navy in space. Some of the potential future roles of the Space Force include planetary defense, space rescue operations, space-based air and missile defense, deploying space-based weaponry (“Rods from God”), space traffic and debris management, space refueling, and the defense of space commerce. USSF is just one sector necessary in a comprehensive U.S. space vision. If the U.S. does not develop a long-term space strategy, it risks failing to anticipate new threats and lacking the capabilities to advance and defend U.S. interests in space. Space Force will be an integral part of that strategy and a broad mandate will be beneficial for USSF strategic planning and creativity. The Space Force’s near-term priorities are not necessarily problematic; however, the Space Force needs to bolster its space domain awareness and better prepare for potential conflicts in space. To ensure the Space Force develops the capabilities it envisions in the future, Congress must further codify roles and missions it will be called upon to play.

The United States is currently engaged in a strategic competition with China and Russia—countries whose governing structures employ unfair market practices. To level the global playing field and compete, the United States needs 2060 North-Star Space Vision that takes full advantage of the financial, legal, policy and other mechanisms that America relies on every day to advance U.S. commercial, scientific, research, and national security interests. Congress and the executive branch secure America’s science and technology future by prioritizing the following: 1) Declare space assets and space derived information and data as critical infrastructure, 2) Authorize a true bipartisan National Innovation Council, similar to the National Security Commission on AI, to craft the nation’s first innovation policy and that forecasts opportunities, requirements, improvement areas and threats over the next decade, 3) Authorize an Office of the Chief Economist (OCE) within the Department of Defense (DoD) to track broad and long-term trends across all DoD priorities and military services, 4) Direct the DoD’s OCE and the Office of Space Commerce within the Department of Commerce to sponsor a Federally-Funded Research and Development Center (FFRDC) specifically focused on information and digital age problems involving innovation such as space economics, finance, and market formations to provide independent research, analysis, and input to the federal government and Congress because existing FFRDCs were formed during the industrial age after WWII to solve industrial age problems such as weapons systems and warfighting, 5) Task this specific economics and finance focused FFRDC to provide a plan to stand-up a Space Commodities Exchange can be readily supported and leveraged by DoD to use economics as a tool of national security for innovation, strategic investments, supply chain hygiene, fostering international partnership, and democratizing the acquisition and procurement regimes, 6) Task the Office of Management and Budget (OMB) to require federal departments, agencies, and programs to submit with their annual budget requests a standardized survey on technologies related to space or that fund such capabilities. OMB should provide Congress with forecasts of amounts, types, and timing of federal purchases from the space commercial sector. The reporting of this information is the first step toward evolving government planning to send predictable signals to oversight legislative oversight committees, executive branch decision-makers, and American industry. If the United States falls behind in this new space race and technological competition, it risks losing its leadership position to China – both on Earth and in Space.

Quantifying space superiority is a much more complicated problem relative to the other warfighting domains. It is impossible to have multi-domain superiority without both cyber and space superiority, which demonstrates the importance of the Space Force. In FY 2021, the Space Force had a budget of $15.4 billion. Comparatively, in the Biden administration’s recently released FY 2022 discretionary spending outline, $24.7 billion was requested for NASA, a 6.3 percent increase from FY 2021. In recent years, NASA has been able to cut costs and improve efficiency by outsourcing certain roles to the private sector (e.g. space launches). Similarly, the Space Force will potentially be able to outsource certain mission sets to the private sector as well; however, it will first need to conduct a capability gap assessment to determine the service’s resources and needs, and identify outsourcing opportunities. In order for America’s newest branch to be successful, the U.S. must also prioritize the development of its space workforce. Specifically, the U.S. needs to cultivate the next generation of space talent and ensure that they have the opportunity to pursue careers in the space sector. The Space Force will need to create opportunities for its officers to advance and receive promotions in order to retain personnel. The Space Force Association has taken a number of steps to support the Space Force, such as assisting in the establishment of the congressional Space Force Caucus, launching a Space Center of Excellence, among others. 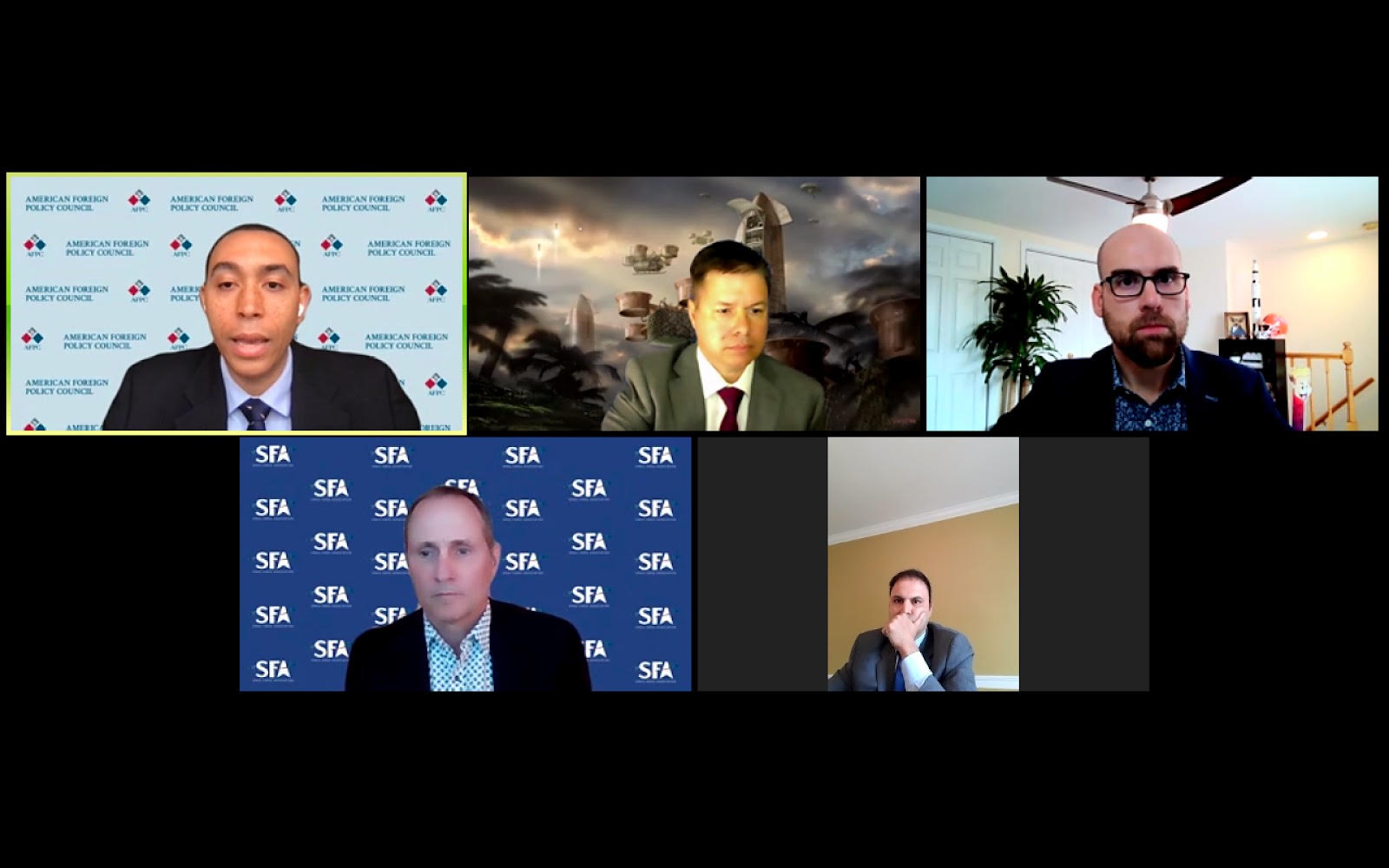 The virtual panel of experts briefed an online audience of Congressional staffers.