China and Africa: A Century of Engagement

The People's Republic of China once limited its involvement in African affairs to building an occasional railroad or port, supporting African liberation movements, and loudly proclaiming socialist solidarity with the downtrodden of the continent. Now Chinese diplomats and Chinese companies, both state-owned and private, along with an influx of Chinese workers, have spread throughout Africa. This shift is one of the most important geopolitical phenomena of our time. China and Africa: A Century of Engagement presents a comprehensive view of the relationship between this powerful Asian nation and the countries of Africa.

This book, the first of its kind to be published since the 1970s, examines all facets of China's relationship with each of the fifty-four African nations. It reviews the history of China's relations with the continent, looking back past the establishment of the People's Republic of China in 1949. It looks at a broad range of areas that define this relationship—politics, trade, investment, foreign aid, military, security, and culture—providing a significant historical backdrop for each. David H. Shinn and Joshua Eisenman's study combines careful observation, meticulous data analysis, and detailed understanding gained through diplomatic experience and extensive travel in China and Africa. China and Africa demonstrates that while China's connection to Africa is different from that of Western nations, it is no less complex. Africans and Chinese are still developing their perceptions of each other, and these changing views have both positive and negative dimensions.

David H. Shinn is the former U.S. ambassador to Ethiopia and Burkina Faso and teaches international affairs at George Washington University. He is coauthor of The Historical Dictionary of Ethiopia.

Joshua Eisenman is Senior Fellow in China Studies at the American Foreign Policy Council, a PhD candidate in political science at UCLA, and teaches comparative politics at New York University. He is coeditor of China and the Developing World: Beijing's Strategy for the Twenty-First Century. 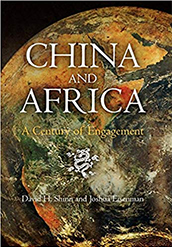