China’s dismantling of the Mao-era rural commune system and return to individual household farming under Deng Xiaoping has been seen as a successful turn away from a misguided social experiment and a rejection of the disastrous policies that produced widespread famine. In this revisionist study, Joshua Eisenman marshals previously inaccessible data to overturn this narrative, showing that the commune modernized agriculture, increased productivity, and spurred an agricultural green revolution that laid the foundation for China’s future rapid growth.

Red China’s Green Revolution tells the story of the commune’s origins, evolution, and downfall, demonstrating its role in China’s economic ascendance. After 1970, the commune emerged as a hybrid institution, including both collective and private elements, with a high degree of local control over economic decision but almost no say over political ones. It had an integrated agricultural research and extension system that promoted agricultural modernization and collectively owned local enterprises and small factories that spread rural industrialization. The commune transmitted Mao’s collectivist ideology and enforced collective isolation so it could overwork and underpay its households. Eisenman argues that the commune was eliminated not because it was unproductive, but because it was politically undesirable: it was the post-Mao leadership led by Deng Xiaoping—not rural residents—who chose to abandon the commune in order to consolidate their control over China. Based on detailed and systematic national, provincial, and county-level data, as well as interviews with agricultural experts and former commune members, Red China’s Green Revolution is a comprehensive historical and social scientific analysis that fundamentally challenges our understanding of recent Chinese economic history. 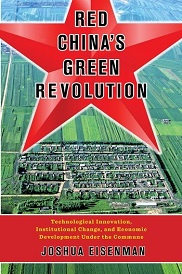