Egypt has played a central role in the history of Islamism over the past century. It was the birthplace, in 1928, of the Muslim Brotherhood, the world’s first modern Islamist social and political movement. The Brotherhood became the main political opposition to successive Egyptian governments, from the time of President Gamal Abdel Nasser through the rule of Hosni Mubarak. In 2011, Mohammed Morsi became Egypt’s first Islamist leader, and his brief tenure as President allowed Islamists and Salafists to gain stature and authority in the country. Mass protests led the military to oust Morsi in 2013, and the subsequent government of former general Abdel Fattah al-Sisi has made a crackdown on Islamists a centerpiece of its domestic policies.,, 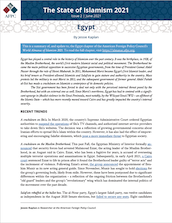